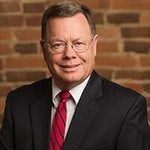 Mr. Pate is the senior partner of Pate and Knott, Attorneys at Law, and has been engaged in the practice of law since 1979. His practice is focused in the areas of domestic litigation, including divorces, child custody, child support, paternity actions, and civil litigation, personal injury cases, criminal law, and juvenile law. Mr. Pate also handles a broad scope of appellate cases in civil and criminal.

Mr. Pate received his undergraduate degree in political science and economics, from Middle Tennessee State University in 1974, and received his doctorate of jurisprudence from the Nashville School of Law in 1979. Mr. Pate began practicing law in Nashville where he practiced until 1995, when he moved his practice to Murfreesboro, Tennessee, and has practiced on the historic square to date.

Thank you for contacting us. We will get back to you shortly.

Please complete all required fields below.

The Firm of Pate and Knott charges no fee for the initial consultation regarding personal injury cases, including automobile/truck/motorcycle accidents, slip and fall accidents or any other type of accident caused by a third party. Call us at (615) 848-1221 or contact us online to schedule a free consultation at our Murfreesboro office. Evening and Saturday appointments available.